One popular method of Physical Vapor Deposition (PVD) is Sputtering, which has numerous product applications. Whereas commercial Sputter systems are often geared to large scale production volume of established processes, there is also a need for smaller scale sputtering systems for research and development where versatility is generally more important than volume throughput. These same smaller sputtering systems can also serve for lower volume initial production.

This paper will discuss some of the features and capabilities that can be available in smaller Sputter systems geared to low volume work such as research and development, in particular the use of a confocal arrangement of multiple targets around the perimeter of a circular rotating substrate stage, all angled in toward it.

Smaller chamber size has advantages of lower cost and smaller laboratory footprint, and the use of small circular cathodes also limits the investment required for target materials. At today’s prices, a large gold target may cost nearly as much as the piece of equipment. Also, those small circular cathodes, available commercially from several sources, almost always have clamp on targets, making target material changes fast and easy and making it practical to be able to own and utilize targets of numerous different materials to support development work on many fronts.

It is possible to configure such a system in any desired orientation, for sputter down, sputter up, or sputter horizontally. This full tri axis capability can utilize any desired pumping configuration such as cryo or turbo. It is also possible to have just a simple single chamber, to be fully vented for loading and unloading, or to add either a manual or mechanized transfer arm load lock.

One key configuration element for maximal versatility is a rotating substrate stage centered within a ring of cathodes such that they are all angled in toward it in a confocal arrangement giving each the ability to provide adequate deposition coverage across the entire stage surface as it rotates, giving acceptable uniformity on the substrate or substrates. With adequate power supplies and controls, these cathodes can be fired individually or can be fired two (or more) at a time for co-deposition.

Any desired type(s) and quantity of cathode power supplies can be used, such as RF, DC, or pulsed DC. But these power supplies will be smaller than the ones required for large high volume tools, and thus less expensive, and the lower power cathodes reduce the demand for such facility support as total electrical power required or cooling water required.

Gas systems can include multiple gas channels, as would be desired for reactive sputtering, and can have either upstream or downstream pressure control as desired.

Another feature that can add to the total versatility for experimentation and process development is to have substrate stage temperature capability. Most commonly this is a stage heater, but some degree of cooling, while a bit more involved, is also possible. Such optional things as substrate bias can also be done, as well as features such as sputter etch or ion beam.

The number of cathodes, as well as their physical position and orientation, can be fixed – the lowest cost option – or can have some degree of mechanical adjustment capability such as angle or distance. 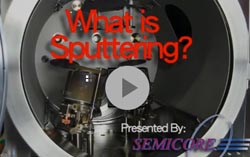 What Is Sputtering? Video

Obviously, adding more cathodes will force a somewhat larger chamber, and each additional cathode or power supply or other feature mentioned above carries some cost elements,. But if the features are needed, they are needed, whether in a smaller platform or a larger system. In general, any feature that could be put in a large system could be put in a small one.

Adding features to the smaller sputtering system will undoubtedly cost less than adding the same features to a larger, higher throughput system. This smaller chamber, confocal cathode array approach remains a viable way to have all the features you need at a lower cost than most other approaches to configuring a sputtering system to support development work, whether in a commercial facility or a university laboratory.

Norm Hardy is a Process Engineer at Semicore Equipment Inc., a worldwide supplier of high performance small chamber confocal sputtering equipment. Please let our helpful support staff answer any questions you have regarding “What is Small Chamber Confocal Sputtering?” and how to implement the best techniques for your specific Confocal Magnetron Sputtering Equipment needs by contacting us at sales@semicore.com or by calling 925-373-8201.

Features Of In Line Sputtering Systems

An “In Line” PVD Sputtering System is one in which substrates pass linearly beneath one or more Sputter cathodes to acquire their Thin Film coating. Normally the substrates are loaded onto a carrier or pallet in order to facilitate this motion, and some smaller systems handle just one pallet per batch run. Larger systems may have the capability of handling multiple pallets through the use of end station pallet handlers that send and receive one pallet after another in a continuing convoy passing through the transport subsystem, the tip of each following behind the tail of the prior one… Read More