Physical Vapor Deposition (PVD) is a common class of techniques for applying very pure coatings usually in the thickness of angstroms to microns onto substrates, and includes Thermal Evaporation from a heated source. This paper discusses principles of Advanced Thin Film Deposition thickness and rate control by use of quartz crystal monitoring. In particular it will go beyond the basics into topics including co-deposition and multi crystal systems for PVD by Thermal Evaporation.

Key to understanding the basis of how quartz crystals are used to measure and control the deposition rate is that as the thin film is being deposited on the crystal in real time in the vacuum chamber, the crystal’s oscillation frequency drops as the crystal’s mass increases from the material being deposited on it. To complete the monitoring system, an electronic instrument continuously reads the frequency converting that frequency data to Thin Film Deposition thickness data, both the instantaneous rate and cumulated thickness. 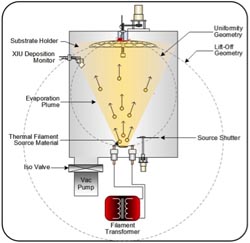 Many quartz crystal monitors  and instruments are readily available on the market today, including in various integrated models that not only read and display the rate and thickness data, but also provide outputs for Thin Film Deposition system control functions. Features vary by model, and you need to be sure to get one that has the features you require, but many can handle multiple independent crystal oscillators and some can also control multiple simultaneous sources.

The most common Thin Film Deposition systems have only a single source operating at one time, although such things as a multi pocket E-Beam sources can have several different materials available for sequential selection and usage to make a multi layer film. And with only one material being evaporated at any moment, there is usually only a single crystal sensor, although it may be special type of sensor head that holds more than one crystal so a spare is ready if one fails during the run. But there can be times when it is necessary or desirable to position multiple crystal sensors around the chamber and average their signals for better control.

A good example of this would be a material that sublimates rather than melts – like dry ice, it just goes from solid to vapor inside the vacuum chamber without becoming liquid. Especially with larger size pieces of source material, such as chunks of silicon oxide, and an E-Beam sweeping across them, there can be significant directivity to the vapor stream and it can change from moment to moment. Since the substrate holder normally rotates during the deposition, the substrates themselves can still come out reasonably uniformly coated as this vapor directivity is averaged out. But a single crystal in a single fixed location only sees the vapor at that point and does not get the benefit of averaging.

And this crystal is, in effect, “driving the bus”. When it thinks the proper thickness has been achieved, it will close the shutter and stop the Thin Film Deposition process, and the substrates have little likelihood of having achieved the same average thickness. So run-to-run repeatability can be very poor and quite frustrating. The solution to this problem is to have several crystals mounted in different location and take signals from all of them and average them out for the control function. There are controller models that can do this.

Even a single crystal has details that are crucial to pay careful attention to, such as calibrating its thickness readings. The crystal monitor can only measure the Thin Film Deposition that lands directly on it, which is not necessarily what a user wants to know or to control. The user wants to know what is actually being coated on the substrates, so physical measurements need to be made to compare to the crystal reading and a calibration factor which is called “tooling factor”.  The fooling factor needs to be calculated, programmed into the instrument, and then verified. With multiple crystals, this needs to be done for each of them, and there may also be the option of “weighting” them so that one sensor is counted on more heavily than another.

The tooling factor can be calculated as follows:

Where Fi is the initial tooling factor, Ti is the film thickness indicated by the instrument, and Tm is the actual, independently measured thickness of the deposited film. If no tooling factor has been used previously, Fi equals 1.

Although not nearly as common as single material layers, it is also possible to perform co-deposition where two sources are simultaneously operated to create a blended layer of two materials. There are inevitably some tradeoffs being made in such a system. You can have, for example, two E-Beam guns in a chamber, but they cannot both occupy the exact same physical space. They cannot both be in the “perfect” position in the center of the chamber, and that becomes a Thin Film Deposition equipment design consideration. But, for co-deposition control, each source needs to have its own crystal sensor, and, ideally, neither sensor should be able to “see” the other source. If it did, there would be cross talk between the two and loss of control accuracy.

So the sensor mounting should include any necessary physical shielding on the sensor heads so that each has a good clear line of sight to its intended source but no line of sight to the other source. You also generally want to have some shielding between the sources themselves to avoid material cross contamination, and for E-Beams, you also need to avoid magnetic interference between guns. But those source aspects are not really part of this paper and will not be discussed further

Once you have all of this taken care of, a suitable chamber with two sources and a suitable crystal control system with the right capability, co-deposition has some important considerations in terms of film programming. Although it is conceivable a user might want to do some unusual layer blending of material A and material B, the most common case is a simple ratio such as 50:50 or whatever through the entire layer, and we will discuss that case.

It is quite possible that the pre-conditioning phase will be different for the two materials, different ramp and soak settings. But remember, if you want both source shutters to open simultaneously in order to have co-deposition at the start of the layer, the duration of the pre-conditioning phase does need to be the same for both. The power levels can be different – no problem. But the total time needs to be the same or one shutter will open before the other and your film will begin in single material mode rather than co-deposition.

You also need to know what you really want your thin film material ratio to be including whether it is thickness based or mass based. The crystal controller is normally all thickness based, so if you want mass instead you need to take that into consideration. And you need to maintain the same rate ratio throughout the process as the final thickness ratio, or the shutters will not close together at the end and the co-deposition will cease when one closes.

Regardless of process type, though, single layer, multi layer, or co-deposition, there is always the potential for a crystal failure during a Thin Film Deposition run. Some models of sensor head hold one or more “spare” crystals and can automatically switch to a new crystal if one fails during the run (if the function is also supported by the controller). Otherwise, there are usually a couple of basic choices that can be made in the controller’s program: abort or complete the layer in “time-power” mode.

What this means is that the controller would take the last known data point – what was the power drive level and the deposition rate and the cumulated thickness at the moment the crystal failed – and just blindly maintain that same power drive for however much longer it would take at that same assumed constant deposition rate to reach the programmed final thickness and then close the shutter. If the power and rate have been fairly stable, this can work well. If they have been unstable, varying wildly, it is a real gamble

It is, of course, a user choice, and various factors should be considered such as whether stopping (aborting) at this point would necessarily mean scrapping all the substrates. In that case, it might be better to take a chance on “time-power” rescuing them.

There are many more aspects of quartz crystal monitoring and control of Thin Film Deposition, and instrument user manuals can provide a great deal of additional information. But quartz crystal control is a highly useful PVD technology and we hope the information presented here will be of help.

Norm Hardy is a Process Engineer at Semicore Equipment Inc., a worldwide supplier of high performance thin film deposition thermal evaporation systems using quartz crystal control.  Please let our helpful support staff answer any questions you have regarding “Advanced Thin Film Deposition Control by Quartz Crystal Monitor” and how to implement the best techniques for your specific Thin Film Vacuum Thermal Deposition Equipment  needs by contacting us at sales@semicore.com or by calling 925-373-8201.

What is Patterned Thin Film Deposition for Lift Off?

Thin Film Coatings are sometimes applied to entire surfaces of substrates, “wall to wall” so to speak, in a continuous unbroken film. But many times the final form of whatever particular material is being applied is patterned so that it is coated in certain specific areas and bare in others… Read More