An introduction to the confocal method of magnetron sputtering that allows serial and co-sputtering of materials in the production of thin films.

Confocal sputtering is the technique of arranging magnetrons within a vacuum chamber in such a way that multiple materials can be applied onto the substrate without breaking vacuum.  Confocal sputtering also allows the user to co-sputter, or to create a film of two or more materials at once.  This method is popular for research and development tools and for small scale batch productions.

For conventional top down sputtering, only one material will be able to be sputtered at a time.  This is because of the geometric relation that the magnetron has with the substrate.  Generally when sputtering in this way, the target material must be larger than the substrate to yield acceptable film uniformity.

Because of this, the user must change the targets if they wish to sputter a different material.  This method also requires the target material to be much larger than the area of the substrate.  With confocal sputtering, the target is positioned at an angle relative to the substrate surface.  By doing this, the magnetron must also be moved off center of the rotational axis and be rotated during deposition in order to create an acceptable uniform film thickness, (see figure 1).

Multiple magnetrons with different materials can now by located equidistant to the substrate rotation axis, and each can still provide a very uniform film thickness.  This allows for multiple materials to be applied during a single process, either in series, or concurrently, to create complex films.

Confocal cathode sputtering is based on changing the angle of the cathode target with respect to the substrate in order to create a more uniform deposition process. Confocal sputtering requires that the cathode be mounted at an angle (θ) relative to the vertical (y) axis (See figure 1).

substrate about its own axis with the cathode offset, this non-uniformity is minimized.  During rotation, the linear surface velocity of a point on the substrate increases as the radius to that point is increased. This causes the area of the substrate with the shortest distance to the target to be exposed to plasma for a shorter amount of time compared to the center of the substrate which has a slower linear velocity.  Uniform deposition is achieved because of the tilted orientation of the cathode.  Highly uniform films can be created when the target distance from the substrate and the tilt angle are optimized.  Because of this, confocal sputtering can often achieve better than ±5% non-uniformity in film thickness. 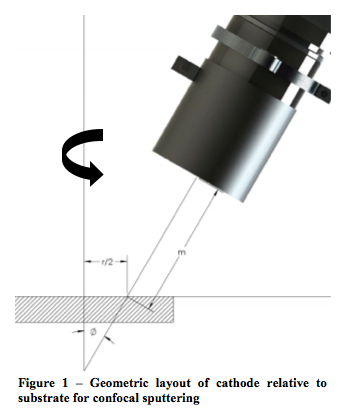 To position a cathode for confocal deposition, a line is drawn that runs through the center of the cathode (parallel to the particle flow) and intersects the y axis.  This line is then to intersect the substrate at a distance of r/2 from its rotational axis.  For best results, θ is set to 30°.  At this point the only variable left is m, or the distance of the cathode to the substrate.  The smaller the value of m becomes, the greater the deposition rate, but at the cost of higher non-uniformity.  The accepted ideal distance for m is approximately 4 inches.  In most systems, 3-4 cathodes provide the best balance of material flexibility, uniform film thickness, and good deposition rates.  Adding more than 4 cathodes to the system will begin to compromise the uniformity capabilities of the system due to the changes in the throw distance. 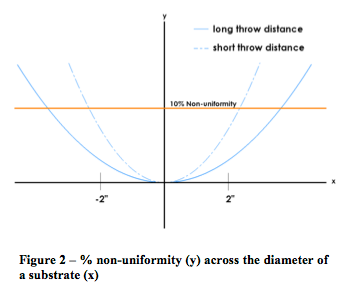 By tilting the magnetron in a confocal arrangement, one can utilize the flat portion of the parabolic curve to obtain better uniformity, without decreasing the deposition rate.  Figure 3 illustrates how this rotation brings the flat part of the curve within +/- 5% uniformity.  The combination of a 30 degree offset for the magnetron, and a 4 inch throw distance provide the ideal combination to create the most uniform film.  Because of this, a high percentage of the sputtered material is being deposited onto the substrate compared to top down sputtering given the same uniformity requirement. This increases the target efficiency as more of the material will be utilized for its intended purpose.  This is particularly beneficial for precious metals.  Confocal sputtering inherently uses smaller targets than conventional sputtering.

When more magnetrons are added to a system, the distance from which they are located relative to the substrate rotation axis must not be changed in order to preserve the complex geometry of the confocal arrangement.  At the addition of a fourth or fifth magnetron, this distance must grow in order for all the magnetrons to be equidistant from the rotation axis.  Because of this, generally no more than three to four cathodes can be utilized in confocal sputtering.  Using more cathodes will result in increased non-uniformity and decreased sputtering rates.

Source to substrate distance, cathode angle, and the location that the centerline of the target intersects with the substrate are all important aspects in producing high quality thin films.  One way to insure adjustability in all of these areas is with the use of flex mount cathodes.  These cathodes provide the adjustment necessary to change the angle of the target relative to the substrate.  These cathodes allow the user to have the greatest flexibility and precision in depositing highly uniform films. 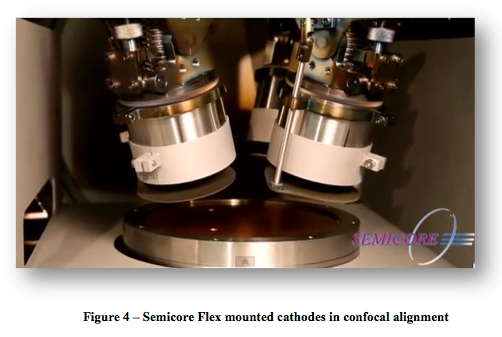 Based up on the above information, it can be seen that confocal sputtering provides many benefits to the user and adds flexibility to the system.  Confocal sputtering increases the yield of the sputtered material and improves film uniformity.  With the capability of having multiple materials in the vacuum chamber at once, time is shortened in the creation of complex films, as well as allowing for co-sputtering to take place. Another benefit of confocal sputtering is lower target cost. Co-sputtering is highly recommended for today’s cutting edge research and development systems.

Matt Hughes is President of Semicore Equipment Inc, a leading worldwide supplier of sputtering equipment for the electronics, solar energy, optical, medical, military, automotive, and related high tech industries. Please let our helpful support staff answer any questions you have regarding “What is Small Chamber Confocal Sputtering?” and how to implement the best techniques for your specific Confocal Sputtering Equipment needs by contacting us at sales@semicore.com or by calling 925-373-8201.

Primarily used in the watch and jewelry industry, Gold Sputtering is also widely used in the manufacture of electrical components ranging from silicon wafers to circuit panels, optical fibers, batteries and glass, and the coating of specimens for examination under electron microscopes… Read More