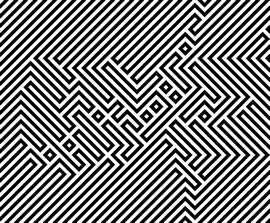 Thin Film Coatings are sometimes applied to entire surfaces of substrates, “wall to wall” so to speak, in a continuous unbroken film. But many times the final form of whatever particular material is being applied is patterned so that it is coated in certain specific areas and bare in others.

There are two principal ways to achieve this effect:

1) Subtractive, or Etch Back process – the entire surface is coated, and then select portions are removed, leaving the desired pattern. The pattern generating step normally involves some form of physical masking agent and then an appropriate type of etching to remove what should be removed and not damage anything else.

2) Additive, or Lift Off process – the pattern generating step, which again will normally involve some sort of physical masking agent, comes first. This is followed by the coating process, which is similar to using a stencil. Only the desired pattern gets applied through the openings in the deposition mask onto the actual substrate. The excess ends up on top of the mask and is removed when the deposition mask is lifted off. This type of Thin Film Deposition Lift Off process will be the subject of this article. A major consideration for choosing a Physical Vapor Deposition (PVD) process for Lift Off is the pattern specification. If the pattern dimensions and tolerances are relatively large, a physical mask such as a thin sheet metal stencil can work known as the Metal Lift Off process which can be essentially any type. But for smaller dimensions, sharper line resolution, and tighter tolerances, the mask will probably have to be photoresist. To achieve clean lines, this photoresist is usually exposed and developed to create a negative slope, an “overhanging” edge so that the deposition can be shadowed beneath it leaving a small gap between the edge of the coated line and the photoresist coverage. There are also special dual layer photoresists for this purpose, giving a step overhang instead of a slope.

And to take real advantage of the capability thus afforded, which can give good results in micron or smaller dimensions, the deposition vapor stream must have a long mean free path and impinge on the masked substrate perpendicular to its surface. The former requires low chamber pressure, typically below 10-4 torr. And the latter normally requires a relatively long throw – the distance from source to substrate.

For both of these reasons, Thermal Evaporation is usually the PVD process of choice. The source is normally located in the center of the bottom of a vertical cylindrical chamber. The substrate holder (usually called tooling) is a dome rotating about a vertical axis centered above the source at a typical distance of 18 inches or more. The dome is commonly curved, a portion of a sphere with some radius of curvature. For Lift Off, this radius of curvature should be equal to the throw distance, which is the source to substrate (dome) distance.

If the source were a true mathematical point source, it would thus be located at the center of an imaginary sphere of radius R, with the actual dome being the topmost portion of said sphere. With process pressure typically in the 10-5 to 10-6 torr range, the mean free path – the average distance an evaporated atom or molecule will travel in a straight line before colliding with another gas atom or molecule – will be at least comparable to R. And with the vapor particles all traveling in straight lines to all points on the dome, each one is on a direct radial line and will strike the surface of the dome perpendicular to the plane that would be tangent to the surface at that point.

This condition produces perpendicular incidence on the curved dome surface, which is necessary for best pattern accuracy – a vapor stream coming in at an angle will not deposit exactly in the center of the photoresist (mask) opening as was intended. But substrates are almost always flat, which is a deviation from this ideal curved surface and therefore a deviation from completely perpendicular incidence. A good rule of thumb for high accuracy Lift Off patterns is to keep this angular error, the deviation from perpendicular vapor stream impingement on the substrate, to less than 5 degrees. And, for substrates such as semiconductor wafers in standard tooling domes, the vapor stream is perpendicular at the center of the wafer (zero angular error) and increases toward the edges, with the maximum error being dependent on the wafer diameter in relation to the throw distance.

Another important fact associated with Lift Off methods and techniques as described is that, with the throw distance being constant across the entire dome, the intrinsic vapor deposition rate will fall off from its maximum at the dome’s center directly above the source to lower values approaching the perimeter. In accordance with Knudsen’s Law, this should follow a theoretical cosine curve for the increasing deviation of evaporant stream angle from zero (vertical) at the center to its maximum at the dome perimeter.

This intrinsic non uniformity of the deposition thickness should be compensated by a fixed blocking mask in between the source and the dome working in combination with dome rotation to effectively block a portion of the heavier central deposition to reduce it to the same level as the perimeter deposition. There are, of course technical details in the designed shape of this deposition mask, but without it the thickness uniformity will not be optimal. Note that this uniformity mask is a large scale fixed blocking mask behind which the dome rotates, quite different from the fine scale patterning mask (photoresist) which rotates with the dome/substrates..

As with all such things, there will be details to work out with your Lift Off techniques and methods in order to establish a good working process for your end product. Lift Off PVD thin film deposition processing however, can be a very useful tool to have available, especially when selective etch back is difficult or impossible due to the specific materials being used not having acceptable selective etchants available.

Norm Hardy is a Process Engineer at Semicore Equipment Inc., a worldwide supplier of high performance thermal evaporation deposition equipment. Please let our helpful support staff answer any questions you have regarding “What is Thin Film Deposition for Lift Off?” and how to implement the best methods and techniques for your specific Thin Film Vacuum Thermal Evaporation Equipment  needs by contacting us at sales@semicore.com or by calling 925-373-8201.

What is E-Beam Evaporation?

E-Beam or Electron Beam Evaporation is a form of Physical Vapor Deposition in which the target material to be used as a coating is bombarded with an electron beam from a charged tungsten filament to evaporate and convert it to a gaseous state for deposition on the material to be coated. Taking place in a high vacuum chamber, these atoms or molecules in a vapor phase then precipitate and form a thin film coating on the substrate… Read More

Thin Film Deposition is a vacuum technology for applying coatings of pure materials to the surface of various objects. The coatings, also called films, are usually in the thickness range of angstroms to microns and can be a single material, or can be multiple materials in a layered structure. This paper discusses the basic principles of thickness and rate control by use of quartz crystal monitoring… Read More