DC or Direct Current Sputtering is a Thin Film Physical Vapor Deposition (PVD) Coating technique where a target material to be used as the coating is bombarded with ionized gas molecules causing atoms to be “Sputtered” off into the plasma. These vaporized atoms are then deposited when they condense as a thin film on the substrate to be coated. 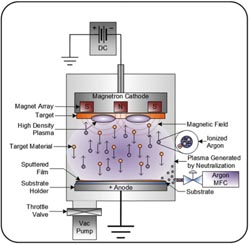 DC Sputtering is the most basic and inexpensive type of sputtering for PVD metal deposition and electrically conductive target coating materials. Two major advantages of DC as a power source for this process is that it is easy to control and is a low cost option if you are doing metal deposition for coating.

DC Sputtering is used extensively in the semiconductor industry creating microchip circuitry on the molecular level. It is used for gold sputter coatings of jewelry, watches and other decorative finishes, for non-reflective coatings on glass and optical components, as well as for metalized packaging plastics.

The basic configuration of a DC Sputtering coating system is the target material to be used as a coating is placed in a vacuum chamber parallel to the substrate to be coated.

The vacuum chamber is evacuated to a base pressure removing H2O, Air, H2, Ar and then backfilled with a high purity inert process gas – usually Argon due to its relative mass and ability to convey kinetic energy upon impact during high energy molecular collisions in the plasma that creates the gas ions that are the primary driving force of sputter thin film deposition. Typical sputter pressures range from 0.5mTorr to 100mTorr

A DC electrical current typically in the -2 to -5 kV range is then applied to the target coating material that is the cathode or point at which electrons enter the system known as the negative bias. A positive charge is also applied to the substrate to be coated which become the anode.

The electrically neutral argon gas atoms are first ionized as a result of the forceful collision of these gas atoms onto the surface of the negatively charged target which eject atoms off into the plasma – a hot gas-like state consisting of roughly half gas ions and half electrons that emits the visible plasma glow.

The ionized argon gas atoms are then driven to the substrate which is the anode or positive charged bias attracting ionized gas ions, electrons and the vaporized target coating atoms which condense and form a thin film coating on the substrate to be coated. DC Magnetron sputtering uses magnets behind the negative cathode to trap electrons over the negatively charged target material so they are not free to bombard the substrate, allowing for faster deposition rates.
The magnetic field forms a boundary “tunnel” which traps electrons near the surface of the target that improves the efficiency of the gas ion formation. DC Magnetron Sputtering allows for higher current at lower gas pressure that achieves an even higher thin film deposition rate. 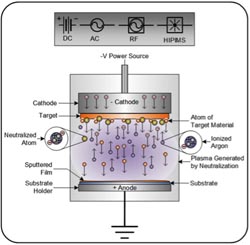 Diagram of the
DC Sputtering Process

While DC Sputtering is the economical solution of choice for many types of metal coatings, its primary limitation is that non-conducting dielectric insulating materials take on a charge over time which can result in quality issues like arcing, or the poisoning of the target material with a charge that can result in the complete cessation of sputtering.

Despite the relative simplicity of DC Sputtering it usually has low deposition rates compared to more complicated HIPIMS that is the result of lower plasma densities and higher gas densities.

However, the relative simplicity of the DC Power source compared to RF or HIPMIS Power sources that require much more complicated configuration, cabling and higher energy costs continues to make DC Sputtering the low cost solution for many types of vacuum metal deposition like gold sputtering and other electrically conductive coatings.

Matt Hughes is President of Semicore Equipment Inc, a leading worldwide supplier of sputtering equipment for the electronics, solar energy, optical, medical, military, automotive, and related high tech industries. Please let our helpful support staff answer any questions you have regarding “What is DC Sputtering?” and how to implement the best techniques and equipment for your specific Metal Deposition DC Sputtering Equipment needs by contacting us at sales@semicore.com or by calling 925-373-8201.

Compared to conventional DC Sputtering, arcing can be greatly decreased or even eliminated by pulsing the DC voltage in the 10–350?kHz range with duty cycles in the 50–90% range.  A Pulsed DC electrical current typically in the few hundreds of volts range is applied to the target coating material. the voltage is either turned off or more frequently reversed with a low voltage short duration cycle to “cleanse” the target of any charge buildup… Read More