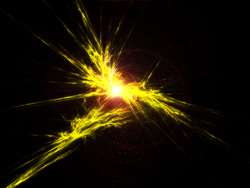 High Power Impulse Magnetron Sputtering or HIPIMS is a relatively recent advance in sputtering technology used for the physical vapor deposition of thin film coatings based upon Magnetron Sputtering with a high voltage pulsed power source. HIPIMS utilizes a very high voltage, short duration burst of energy focused on the target coating material to generate a high density plasma that results in a high degree of ionization of the coating material in the plasma.

By pulsing the target coating material with bursts of high voltage energy – with a length of ~100 µs on the order of kW·cm-2 but with a relatively short duration or “Duty time” of less than 10% – allows for a large fraction of the sputtered target material to be ionized in the plasma cloud without overheating the target and other components of the system. The target has a chance to cool during the predominant “Off duty” time which results in a low average cathode power of 1–10 kW which helps maintain process stability. Diagram of the HIPIMS Process

First reported and patented in 1999 by V. Kouznetsov, HIPIMS within a relatively short period of time has attracted the attention of many top researchers and industry leaders as the innovative coating technique of choice. The main advantage of HIPIMS coatings are that they produce much more dense, harder and smoother coatings compared to more conventional thin film deposition techniques.

The main advantages of HIPIMS over conventional sputtering is the control of a pulsed powerful high voltage that ionizes a very high percentage of the target material without overheating, creating a dense plasma cloud with virtually no droplets. This produces high performance dense coatings with good adhesion that are extremely smooth

The high voltage levels for short durations of time and the increased velocity of ionization of the target coating material results in HIPIMS having improved film adhesion and enables more uniform films to be deposited on complex shaped substrates. These advantages are making HIPMIS increasingly popular for tough, very high density films that have high columnar growth with no voids on substrates where more conventional, line-of-site deposition does not fill the “Hills and valleys” of irregular shaped substrates such as drills or other cutting tools.

Pulsing dramatically changes the energetics of the plasma stream by producing ionized atoms with much higher energy levels than conventional sputtering that greatly increases the probability of ionizing collisions, where sputtered material is ionized colliding with process gas atoms.

HIPIMS generates a very high density plasma on the order of 1013 ions·cm-3. Some research papers report up to a 90% increase in the fraction of ionized sputtered material compared to conventional Magnetron Sputtering.

HIPIMS coating combines the advantages of high intensity arc technology with Magnetron Sputtering. A key advantage of HIPMIS is simplicity, because with a little retooling any existing Magnetron Sputtering system can be turned into an HIPMIS system. Basically, all one needs in many cases is an HIPIMS power supply. When the high intensity pulse is applied a dense doughnut-shaped plasma expands from the erosion zone of the target into the magnetron. At the highest level of the discharge the plasma density can exceed 1019 electrons/m3. This expanding doughnut-shaped plasma is then reflected off the chamber walls back into the center of the chamber, resulting in a second density peak several hundreds of µs after the electrical pulse is terminated.

The initial HIPIMS discharge is dominated by gas ions, whereas the secondary density peak reflecting off the chamber walls has a strong component of self-sputtering electrons. For some coating materials this secondary reflective peak can become completely self-sputtering. This trapping of secondary electrons plays a major part in the creation of the dense plasma.

This results in another advantage of HIPIMS, which is that it can be used on more temperature sensitive substrates due to the “cooler plasma” that reaches the substrate as a result of the increased ionization that is the result of the secondary gas collisions.

Another useful application of HIPIMS is with the pretreatment of a substrate surface prior to coating to “Cleanse” a surface of impurities for greater adhesion. HIPIMS bombards the surface with high energy gas ions removing the natural oxide layer that can be found on most substrates to be coated. The high ionization of the metallic plasma produces a deep etching and ion implantation ideal for high performance products like automotive parts, metal cutting tools, non-corrosive and decorative finishes.

Arcing on the cathode or target surface is another problem with HIPIMS. Light arcs that look like sparks on the target material are a relatively minor issue and don’t do much damage.

Heavy arcs however, can be seen as plasma columns spreading from the cathode target material into the plasma. These arcs can overheat the target resulting in the ejection of microdroplets that causes problems with a uniform film growth.

The causes of HIPIMS arcs are related to the purity of the target, the surface structure, and dielectric particles on the target surface that can take on a high voltage and then discharge producing the arc.

Arcing can also be influenced by the melting point of the target coating materials. High melting point targets like Ti, Cr, and Ta have a low arcing rate, whereas materials with lower melting points like Al and Cu having a much greater tendency to arc. HIPIMS is becoming the emerging coating technology of choice for many researchers and leading edge developers that produce smoother, harder and denser coatings than conventional coating techniques. The fact that most existing Magnetron Sputtering systems can be adapted to HIPIMS by modifying the power source promises to make it an economical solution for advanced thin film growth control and applications in the future.

Matt Hughes is President of Semicore Equipment Inc, a leading worldwide supplier of sputtering equipment for the electronics, solar energy, optical, medical, military, automotive, and related high tech industries. Please let our helpful support staff answer any questions you have regarding “What is High Power Impulse Magnetron Sputtering?” and how to implement the best techniques and equipment for your specific HIPIMS Vacuum Deposition Equipment needs by contacting us at sales@semicore.com or by calling 925-373-8201.

Compared to conventional DC Sputtering, arcing can be greatly decreased or even eliminated by pulsing the DC voltage in the 10–350?kHz range with duty cycles in the 50–90% range.  A Pulsed DC electrical current typically in the few hundreds of volts range is applied to the target coating material. the voltage is either turned off or more frequently reversed with a low voltage short duration cycle to “cleanse” the target of any charge buildup… Read More